For two months now I have been studying Comet, a platform for tracking and monitoring Machine Learning experiments. And, truth be told, I am truly amazed by the countless features Comet provides. I can truly say that every time I use the Comet dashboard, I always discover something new.

Today I would like to describe how to compare the results of two (or more) Machine Learning experiments through the graphical interface provided by the platform.

Comparing two or more experiments is really simple: with a few mouse clicks, you can understand which model performs best.

To illustrate the features provided by Comet, I will describe a practical example, which builds four classification models and chooses the best one.

The article is organized as follows:

Firstly, I load the dataset as a Pandas dataframe:

I have also imported the comet_ml library for further use. The following figure shows an extract of the dataset:

and converting TARGET_5Yrs column the to integer:

I can build the Xand y variables:

Now, I can scale all the input features in the interval 0–1:

Finally, I split data in training and test sets:

Now, I am ready to run the experiments. In this article, I do not focus on model optimization. Rather, my objective is to describe how to compare two or more experiments in Comet. For each experiment, I calculate the following evaluation metrics:

I define an auxiliary function, that returns the first four metrics:

Now, I define another function, named run_experiment(), which builds a Comet Experiment, fits the model passed as an argument, calculates the evaluation metrics, and logs them in Comet:

In the previous example, I have also used the set_name() method provided by the Experiment class to set the name of the experiment to a more human-friendly string.

Now I can call the run_experiment() function with different models. Firstly, I test a Random Forest Classifier:

Then, a Gaussian Naive Bayes Classifier:

Comparing the Experiments in Comet

Once I have run all the experiments, I can check the results in Comet. From the main dashboard, I can see the four experiments:

To choose the best model, simply I can click the sort button:

and choose the sorting criteria: 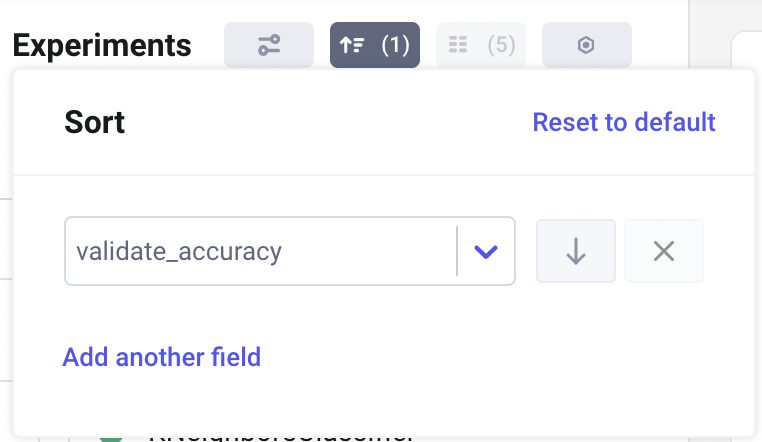 If I click on the Experiments Tab, I can select the columns to show by clicking the columns button:

I select only the evaluation metrics to obtain the following table for comparison among experiments:

I note that Random Forest is the best algorithm in terms of accuracy. The extraordinary aspect is this operation is carried out in a few clicks, which in terms of time requires a few seconds. Through Comet you can shorten run time and make decisions faster.

Now that I have chosen the best model, I can move it to production through the use of Comet Registry. But that’s a whole other story…

Congratulations! You have just learned how to compare two or more experiments in Comet! The Comet dashboard is very simple, thus you can choose your best model in just a few clicks!

You can learn more about Comet by reading my previous articles: How to Build a Customized Panel in Comet and Hyperparameter Tuning in Comet.

Our latest product update eases tracking, reproducibility, and collaboration in ML experiment management When you…

This article, written by Kurtis Pykes, first appeared on Heartbeat. A large portion of your time as…

Comet’s Year-in-Review: 2021
Ashley Binford
Notes from this week's Comet Office Hours: Revisiting the fundamentals and Harpreet's Google Search crash course
© 2022 Comet, Inc. - All Rights Reserved
Back To Top
We use cookies to collect statistical usage information about our website and its visitors and ensure we give you the best experience on our website. Please refer to our Privacy Policy to learn more.OkPrivacy policy